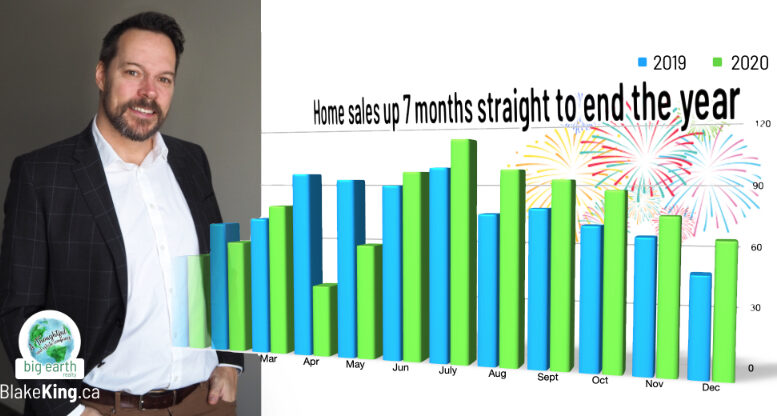 And December killed it!

Maybe the most unpredictable year in real estate was last year. 2020 home sales in Red Deer started off wobbly with the first 3 month’s sales higher, lower, and higher.

Then COVID19 kicked in. With the threat of job losses and complete economic uncertainty, nobody could predict how the market would fair but nobody was optimistic. Would home sales drop?

Home sales did drop in April and May and they dropped substantially. April’s home sales in 2020 were 61% lower than April 2019. The following month was a little better but still 37% lower than the same month a year prior.

Most people, maybe everyone, thought sales would remain lower during the pandemic.

Somehow, sales over the next 7 months, the last 7 months of the year, outperformed 2019. I couldn’t believe it either. And they didn’t just exceed 2019, they were substantially higher. In our local market, a stretch of higher sales for even 3 straight has been rare and this stretch was happening amidst the fallout of the COVID19 pandemic.

Maybe it was the interest rates and maybe it was buyer assuming they’d get a better price during a time of uncertainty, but sale were higher.

April and May showed a very large sales drop but the following 7 months were strong enough to bump total-year-sales just above 2019 sales. It would be hard to beat 2019 with two months down 61% and 37% but it happened.

Here’s how it happened

Home sales are up for another month in Red Deer