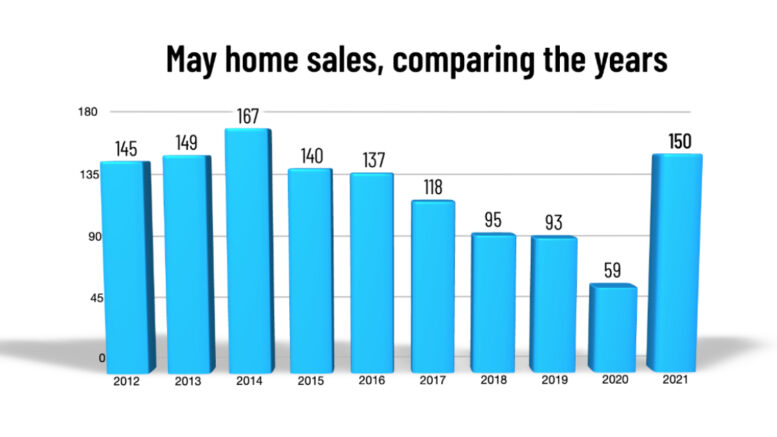 Comparing May home sales in Red Deer through the years

In April and May of 2020 home sales in Red Deer dropped substantially when COVID-19 reared its head. We went from life-as-normal to business closures, layoffs, and complete uncertainty. Nobody knew what was going to happen and that’s why people’s home buying plans were set on the back burner.

It took a couple of months for people to regain their footing and confidently feel it wasn’t the end of the world. The economy was impacted but for the most part, people kept working. Due to restrictions some people and some businesses were hit harder than others but government assistance helped balance things a bit. In addition to government relief, interest rates were also lowered in an attempt to stabilize the housing market.

There was still ongoing uncertainty but for some reason, not just lower interest rates, homes sales began to increase. Each month I post Red Deer real estate home sales and compare them month-to-month and what we noticed was surprising.

April and May 2020 were obviously uncertain months but starting in June 2020 home sales in Red Deer began to overshadow the previous year’s numbers. To the right, the green bars are months in 2020 and after May they outperform 2019 sales (blue) each month. The grey bars represent 2021 months and you and see there’s a definite improvement.

Posting that homes sales are higher and higher each month has started to get mundane so this month I thought I’d compare May home sales over the past decade to see how well they are actually doing. Comparing this April and May with last year is unfair because sales practically stopped then.

All the activity we see and hear about in our local real estate market can seem exceptional unless we compare them to other years. Sales are very high this May compared to last year but there was still a year this decade where May home sales were higher. Home sales in May 2014 were higher than they are this year and May 2012 and 2013 were pretty close too.

Should we consider home sales this year to be off the charts? Probably not because, we weren’t amazed at home sales in 2012, 2013, and 2014. It’s only surprising to see home sales where they are this year because the last few years were slow.

What’s helping make this year appear to be an anomaly is because fewer homes have been listed and it’s causing very low inventory rates each month.

Blake King is a local Central Alberta Realtor® and he posts sales numbers, average price comparisons, and inventory reports each month at iOnRealEstate.ca.