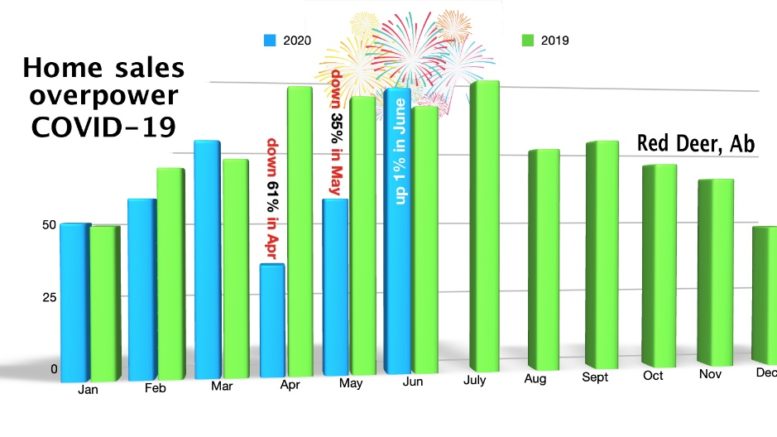 Home sales numbers have been interesting and scary to watch since the onset of COVID-19. When restrictions hit in April sales dropped a scary 61%. People didn’t know what to do and they didn’t know what would happen with the market. With the economy being hit hard, would home sales improve again? Nobody knew.

I think the biggest cause of low sales on sale in April was uncertainty. Nobody knew what would happen so most decided to wait. However, there are a certain number of people and families that needed to move forward and there were some brave souls speculating.

Sellers with homes on the market who needed to sell, not knowing what would happen, accepted some lower than normal offers. With deals possible and interest rates low the market appeared to normalize a bit following April.

May sales improved and were only down 35%. Were people over the scare or were more people than expected taking advantage of low interest rates?

Some restrictions lifted in May and it appeared to give consumers confidence. People waiting appeared to be buying and selling again. We came to realize that part of the economy was still business as usual, and people that were able to make a move took advantage of the opportunities.

Consumer confidence apparently continued to rise in June because sales hit a number a little higher than June 2019. Red Deer sales were up just under 1% in June 2020.

If sale were up in June even close to last year’s numbers it would be good news. That sales would exceed last years number is very surprising. However, before the COVID-19 crisis, it looked like there was a light at the end of the tunnel. We’d ventured through the oil price impact and we’d weathered the mortgage rules changing and then COVID-19 hit. I think if the COVID-19 didn’t happen we’d have seen home sales improve more than we had for a long time.

This could be part of the reason the market is bouncing back better than expected. Sure, buyers see deals and low interest rates but there were also a number of people with real estate plans and now they appear to feel better moving forward.

Keep up to date on real estate news local to Red Deer and Central Alberta at iOnRealEstate.ca

A fully renovated home with a new garage on a large lot for sale in Blackfalds, Ab

Be the first to comment on "Did home sales improve in June?"

This site uses Akismet to reduce spam. Learn how your comment data is processed.