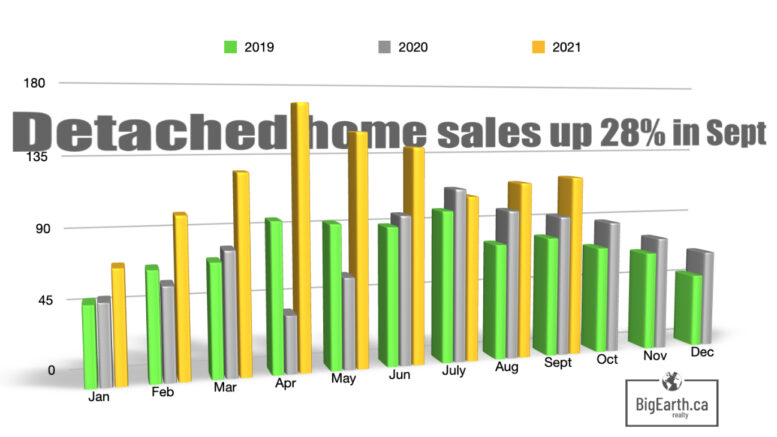 Home sales up again and have now been higher for 15 of the last 16 months. And that’s contributed to this year’s total detached home sales at the end of September hitting a decade record.

It’s hard to identify exactly what’s led to higher sales but is has to be connected in some way to the pandemic.

Higher sales have contributed to lower inventory and when that happens prices tend to increase. Higher prices might sound like a bad thing but it’s worse when prices decrease and over the last 5 years that’s what has happened.

It’s been a relief for many homeowners to watch prices increase a little, it’s nice to see your equity increase. Especially for those homeowners who watched prices dip since buying. However, for buyers the price increase is less welcome.

Don’t worry too much though prices haven’t increased as high as some of the talk has lead most people to believe. We’ve noticed this most when seller jump on the market hoping for a windfall to only find out the increase is nominal.

The market is in a better place

For the last decade the Red Deer and Central Alberta market has been a little stagnant and that hurts the market. When a market rides flat for a long period of time buyers and sellers question what the right move is. But when prices move a bit it makes decisions easier.

Check back next month to see if sales keep beating records.

These are the features homebuyers actually care about